The first thing you notice on arrival in Morocco is that the runners stand out a mile. They're the ones with the Raidlight, OMM or Innov8 backpacks. They're the ones with too much energy to sit down and - if you look a little closer - they're the ones with velcro glued to their trainers (to secure gaitors - which keep the sand out)! They wear sunglasses on their heads at the airport because they are afraid that this essential piece of kit will get broken, and airport security suddenly realise that a lot of people are carrying backpacks full of ration packs and jelly beans! Welcome to April in Morocco - home of the MdS and 860 crazy people! 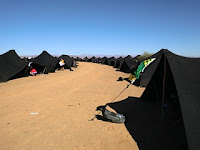 After a 6 hour bus journey (where our bus broke down once!) and a brutal 20 minute army truck ride, we arrived at the bivouac - a tented town set up at the beginning and end of each race stage and an incredibly impressive sight. Tent 79 (with Kerry flag flying proudly) would be our home for the next 9 days. The Berbere style tent housed 8 people (at a squeeze) - with just a rug separating us from the desert floor. Not the most comfortable of surrounds - but all part of the charm of the MdS. No comforts, nothing easy - go hard or go home! 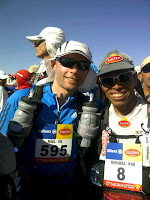 Stage one, April 8th was a nice gentle 33.8km (22 mile) introduction to the desert (not!), from Ammouguer to Oued El Aatchana. Standing a little nervously on the startline at 8:30am that morning - I looked to my left to suddenly see my hero of the MdS and 4 time winner, Mohamad Ahansal, appear by my side. A little internal battle started in my head - should I leave him be, or ask for a photo? I plucked up the courage and a little pigeon French to point to my phone and ask for a quick snap. Handing my phone to a French guy standing beside us - I pointed and asked if he could take a photo. He failed first time, handing the phone back with a typical French shrug. Mohamad stood, checked my phone to see if I got a photo - and then asked the French runner to take it again. This is the result - a completed legend and probably one of my biggest highlights during the week!

The stage itself went pretty well for me. The image, left, was taken just off the start line. Temperatures reached 46 deg Celsius. My plan was to run at a comfortable pace for 9 minute intervals, and walk for one minute, depending on the terrain. During that minute I would drink and perform any adjustments needed (backpack, etc). It worked really well. I kept my heartrate below 150bpm as much as possible and felt very comfortable. The stage itself passed some picturesque ruins and contained a few sharp jebel climbs and some rocky terrain. Nothing too difficult. I finished in 4:34 and in 143rd position. A nice start - lots left in the tank - just as I'd hoped for.

Stage two saw temperatures reach 51 deg - the 2nd hottest day ever recorded at the MdS. It was a 38.5km route from Oued El Aatchana to Taourirt Mouchanne. The abiding memory of this stage was a 10km stretch between checkpoints 2 and 3 across a dried up lake bed. It was desolate, endless and mentally brutal! Many people suffered here! This was followed by our first section of sand dunes. The organisers had given us one extra 1.5 litre bottle of water due to the conditions, but even this wasn't enough. Dehydration and cooling was a problem - and pacing was critical. I finished in 5:20 - a tough day completed and in 150th position overall. At this point I was happy with my position and my strategies both in race and recovery. I felt strong and things were going well - but I knew my knee would cause problems at some point!

Stage 3 was a little cooler - and a 35km hop from Taourirt Mouchanne to El Maharch. Some big climbs and some big sand dunes! From the very beginning - like most mornings - my knee started to hurt. But this time it didn't ease off, and it didn't get better. I ran/walked to the first checkpoint at 12km. From there it stiffened up and the rest of the stage was agony! Every climb, every descent caused shooting pain. While I could walk the flat sections, running was impossible! Worse was the fact that I had felt great in the morning and physically felt I could run really strongly! I decided to stop trying to run and powerwalk the last, flat 10km as fast as I could (80 minutes). I finished the stage in 5:30. It was slow and I lost a lot of time! My placing dropped to 211th overall. I was gutted, dejected and very frustrated! I was randomly called in to baggage control immediately after the stage. This is where you have to show that you have all the compulsory items in your bag (e.g. headtorch, anti-venom pump, etc), plus your daily food requirements. After a bit of flustering, fortunately I found all the items required! 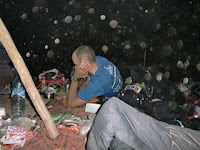 Worse was to follow that night. A terrible sandstorm blew up, blowing sand everywhere - and I mean everywhere! Already feeling down about my knee, my misery grew. Lost in my own thoughts, a tentmate - Paul - took the photo opposite. This was my lowest point. Waiting for my food to rehydrate, being sandblasted (you can see the grains flying about in the image) and my knee aching. That night I curled up in my sleeping bag - and felt miserable for a while. But in the MdS you can't wallow for long. "Go hard or go home" - right? Lots of other people were suffering as much and more, and my tentmates were each bravely battling their own specific problems - that proved inspirational too! Time to rethink my goals and strategy. I decided I would powerwalk my way through stage 4, the long 81.5km stage. Earphones in, head down and save time wherever I could!

I figured I could save minutes at each checkpoint by performing all my preparations before arriving. The image, left (not me!), was a typical checkpoint scene - cards punched, collect your water and fill your own bottles, then add electrolytes before dumping the empty waterbottle. I decided I would unscrew the tops of my bottles, and drop my electrolyte tablets in before getting to the checkpoint. I would then take my water and walk straight through, without stopping, and fill my waterbottles as I walked on. I would take the empty bottle and dispose of it at the next checkpoint. This strategy would save me 2/3 minutes at each checkpoint! I would walk fast and stop for nothing! I felt a little more upbeat. It was a whole new challenge, and a different way of looking at my problem. Could I walk it in a fast time? Bring it on...