Preparing for the Marathon des Sables - Mentally, Physically... and a light backpack!

In this blog, I will try to retell as closely as possible, my experiences of the Marathon des Sables, 2012. The event, for me, was the achievement of a long held ambition - something I have probably dreamed about for the past 12 years since completing my first marathon. I have always said that I am not, and will never be, a good runner. I have poor technique, and I am not genetically designed to be good over long distances! But I do enjoy it, and what I can do is make the best of what I have and know.

I ran the MdS to raise awareness and funds for 2 great causes, PIPS Programmes and Facing Africa. During the months of preparation I met some great people, had great fun and hopefully got some good publicity and funds for these causes. Now that it's complete - it's the journey that you remember the most. This blog will hopefully tell my story of preparing for, and completing the 2012 Marathon des Sables. I already have plans for the next adventure in place... but for now that can wait! :)


To prepare for the challenge of running 154 miles over 6 days through the Sahara desert, I really focused on 3 main things. First - mental - break the race down as much as I could in my own mind! While everyone around me was building it up, privately I was breaking it down. Distance? "No problem" - I could run 25 miles comfortably and I would be running at a slower pace. Just recover well each day! Heat? "No problem" - stay hydrated and my body will have all it needs to cope. Terrain? "No problem" - only 25% was sand dunes. That meant 75% was either flat, rocky terrain, or dried up earth. I've spent my life running forest trails, so I could cope. 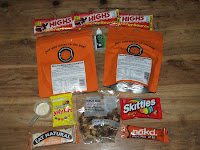 Second - diet - I planned to only eat approx 2400kcal per day (minimum allowed is 2000kcal). I would typically burn 4500+ kcal per day - so I trained my body to burn its own fat stores. The logic being that my calorie deficit would come from around my own wasteline! My race day plan was to eat a minimal breakfast - 50g almonds. This would stimulate my body to focus on burning my own fat stores while running. I kept most of my calories for late in the race and for recovery afterwards. Eat plenty after each run and my muscles would be refuelled for the next day. I made up a 4:1 carbohydrate:protein solution (powder form which I mixed with water) which I took immediately after each run, while my evening meals were dehydrated, high energy expedition food packs. Light in weight (approx 150g per meal) but high in calories (800kcal+). As a strategy, this worked perfectly - though I did get sick of almonds each morning! Luckily, I had some peanuts also and some great tentmates who shared some spare food during the final day! 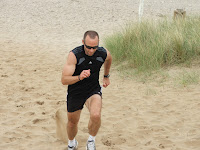 Third was my physical preparation - focus on back-to-back runs in the months before the race to optimise recovery. Focus on leg and core strengthening exercises and focus on running with my backpack on to help my body adapt. I trained on the types of terrain I would find on Morocco - to help my body adjust, and to help my feet get used to the varied movements. When possible, I trained on the sand - 25% of the race is still significant and running on soft dry sand is a very different technique!  I also lost about 6kg of upperbody weight (mostly muscle) to help my legs cope with the added load of the backpack. 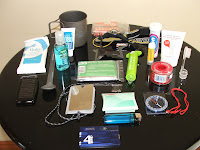 To keep my backpack as light as possible, I excluded every possible comfort I didn't need. I selected the lightest of everything I could find and tried to make it lighter! This included a titanium cup and spoon. I got a tiny cigarette lighter (not in picture) and burned half the gas out of it. I took a half sized toothbrush and I counted exactly how many skittles I would need over the 7 days (for your interest - each weighs about 1g and has approx 4 kcal! lol) - and took no more. This might seem totally insane (which it surely is! lol), but with this attention to detail I ended up with a backpack weighing just over the minimum required for the MdS. Some people had backpacks weighing 15kg - twice the weight of mine! To me - thats insanity!!

Each of these strategies worked perfectly - to a point! Mentally I felt relaxed and confident heading to Morocco and my diet was excellent. My physical training went superbly... until a freak ankle injury during an ultra run in December 2011 upset the applecart. In hindsight, I should have rested it more - but in my frame of mind I decided a week was too much and resumed my training. It's hard to rest when you feel so good!

I decided to run less on the forest trails to protect my left ankle and more on flat roads and sand. I didn't want to run on tarmac, but felt I had to! While it meant I could run without much ankle pain - by compensating and by being unable to do some of my leg strengthening work - I inflicted a much worse injury on my right knee. Two in fact - bursitis under the IT band and acute patellofemoral pain caused by my patella tracking slightly off on knee flexion. I missed just over 5 weeks of training at a critical stage, between February 12th and March 20th. A cortisone injection was required to cure the bursitis - but it was a little too late to fix the second injury. I didn't even know it was there until I started back running on March 20th - with the MdS starting on April 8th! In short - I entered the MdS with a ticking timebomb in my right leg - and I knew it!! However, I'd made my mind up - I'd crawl to the finish line if I had to! Roll on April 5th and my flight to Morocco...
Posted by Noel Brick at 07:33